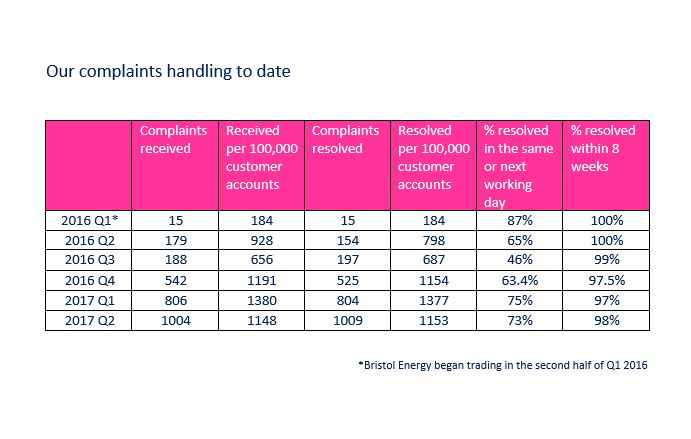 Why did people complain to Bristol Energy in Q2 2017 and what are we doing about it?

• A significant number of Direct Debits which were previously being based on estimated consumption were reviewed between April and June 2017, taking into account actual usage information provided by customers. While this led to a number of customers reporting dissatisfaction, we’re pleased that only 0.7% of Direct Debit Reviews led to a complaint being raised.

• We have recognised the need to improve our customers’ understanding of how monthly payments are calculated, so we have started to amend our communications regarding Direct Debits. This means customers will be more accurately informed regarding their payments both at the start of their contract and while they’re on supply. We are also updating our review processes, and will be more proactive in future in identifying customers who require higher monthly payments before they fall behind.

• Bristol Energy’s customers continue to be unhappy with the amount of time read disputes take to resolve. From January to March the average timescale for gas read disputes was 121 days; from April to June this reduced to 62 days, and in July has fallen to just 37 days. These improvements are expected to continue, and we are putting a significant effort into reporting and analysing the causes of read disputes in order to reduce customer dissatisfaction in the future.

• Electricity read disputes remain low, with just 3% of switches resulting in a read dispute from April to June. This has been achieved through a continued focus on processing opening readings efficiently. This is being complemented by a new process for escalating outstanding disputes, which has increased the levels of automation and efficiency within our read dispute process. This will be integral to our ability to reduce the number of customers affected by outstanding or lengthy read disputes.

• Bristol Energy has grown quickly over the last three months, as consumers hear about our services and arrange to switch. Although we have recruited new members of staff accordingly, the additional contact we received resulted in a backlog of emails throughout April and May. This meant that some customers didn’t receive responses to their queries within a satisfactory timescale, prompting a number of complaints.

• We have now expanded and reorganised our Correspondence team to respond to emails as we receive them, and throughout June and July our performance in this area has returned to normal. We are working with our analysts to better predict how many staff we will require throughout the year, in order to recruit proactively and avoid similar issues in the future.

• The time it took to respond to emails from April to June impacted our ability to add meter readings to customer accounts in time for them to be used on bills. This has now been addressed and is no longer affecting our performance in this area.

• We are continuing to work on our communications with customers to ensure they have all the information they need to be able to submit meter readings on time for their monthly bills. We have also been working on significant improvements to our internal processes to ensure all readings are used on customers’ bills.

• In response to the recent increase in customers switching to Bristol Energy, we recruited a number of new customer-facing and back office staff. Unfortunately this meant that a significant proportion of our colleagues had limited experience within the energy industry, which resulted in a higher proportion of complaints than usual being caused by human error.

• Our new members of staff have become more experienced and confident, and are being supported with improved training and coaching. We have also introduced new processes to record errors, in order to identify areas in which support and training are needed and continually improve our service to customers.

Get your no obligation, personalised quote.