Our MD Sleeps Out

Last Friday, I slept out to help raise money for one of our partner organisations, Caring in Bristol. The event marked the end of Bristol Homelessness Awareness Week, which aims to raise awareness of homelessness, those at risk of becoming homeless and the issues facing rough sleepers.

The sleep out took place at Pip’n’Jay (aka St Philip and St Jacob church) which is alongside the A4044 dual carriageway, near Castle Park. Around 200 people took part, raising money for a variety of charities that support the homeless. 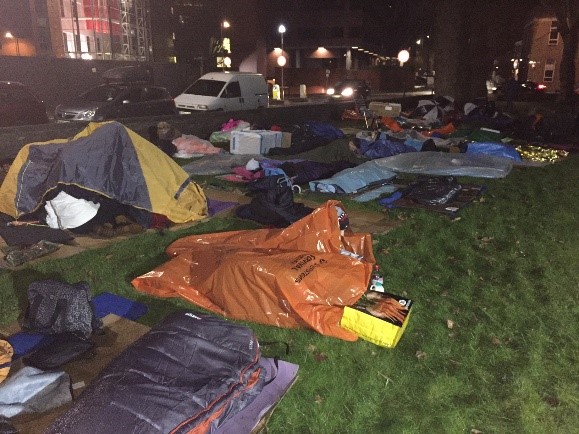 There were a few rules:

1. Bring your own cardboard and plastic sheet (and carry away everything you bring).

And I added a few of my own:

1. No headphones or book to while away the hours.

2. No using my mobile phone.

3. I’d dress warm and use a thin orange survival bag.

I met with Ed from Caring in Bristol, and the event coordinator said a few words, wishing us a “safe, but not too comfortable night.” Shortly after, we were faced with our first discomfort - a 45-minute rain shower, making trying to keep dry a top priority.

Rain easing, we settled down for the night and I realised my first mistake, not taking enough cardboard! But I was limited to what I could find and what I could carry. Next, not enough padding; it was really difficult to get comfortable, probably not helped by my decision to sleep on the flags at the side of the church.

Unable to sleep, but trying to doze, I became acutely aware of two things; the noise of the traffic and the cold. Both become all pervasive and added to the feeling of vulnerability. It’s as far away from a safe warm bed as you can imagine.

As the night wore on and the shouts of revellers returning home died down, I remained curled up in a ball, shivering despite my many layers of clothing.

It was a truly humbling experience. 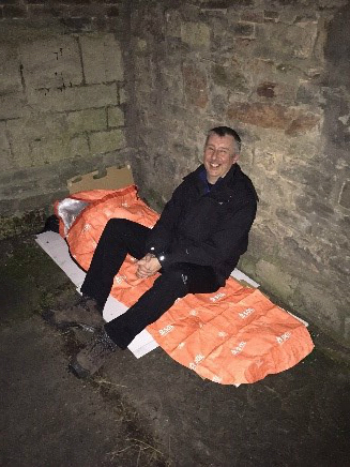 Shortly after 6:00am I wriggled out of my bag and was greeted by Ed who went to get me a cup of tea, a much appreciated act of kindness.

Just before I left, the former mayor and I debated which made for the better sleeping surface – the grass or flags… a somewhat surreal conversation!

Thanks for all those who sponsored me and the many words of support.

Did you know you can help support Caring in Bristol just by switching to us? Quote "CARING001" when you switch and we'll donate up to £30 to the charity.